For those that haven’t met him, the has a bit of a thing for aeroplanes. This really became apparent about a year ago; I read him Sadie the Airmail Pilot every night for at least a month, and he was fascinated by the aircraft flying into Southampton Airport (we’re less than a kilometre south of the perimeter, and probably less than 200m west of the southern approach flight path).

Last summer, we met up with my uncle and aunt at the Isle of Wight Steam Railway (they had a 1940s weekend) and ended up buying him a selection of planes, mostly WWII fighters. She was under my vague instructions (I had thoughts of making him a mobile), but most of the aircraft have ended up going into his toy box. He has a very chipped (and badly modelled) diecast Spitfire, and a number of cheap polystyrene gliders. There were two planes that we didn’t give him, on the grounds that they were too nice. One was a Spitfire kit (that I’ve yet to assemble), and the other was a Corgi diecast of a Mk.IIc Hurricane, from their Battle of Britain Memorial Flight range. He found the latter last week (I was tidying up a shelf, and it was in the pile off stuff that I’d taken down) and has barely let it out of his sight since.

You can see where this is going, can’t you?

Thanks to our location, we get a lot of interesting things going over, from the Red Arrows to a B1-B Lancer. I’ve seen the BoBMF quite a few times (four? five?), so they’re no longer quite as much of a gosh-wow as the first time, even though they still are rather cool. Tonight, we had a Spitfire (a photo-reconnaissance job) and a Hurricane en route to a flypast at Shrivenham.

The hadn’t quite connected the special planes with his toy planes, although he does recognise the replica on the airport roundabout as a Spitfire (I haven’t yet explained that it’s a replica of K5054, the prototype aircraft which flew from the then-named Eastleigh Aerodrome).

He’s now seen ‘his plane’ (or to be more precise, LF363 wearing the colours of YB-W – his plane is a model of this with remarkably accurate markings). He’s one happy little boy, and I’m going to have difficulties getting him to bed tonight. 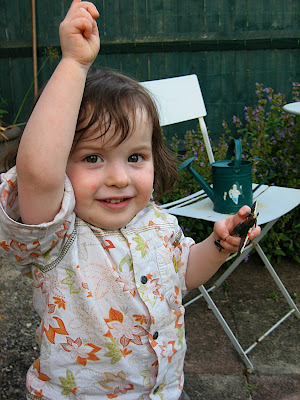