What I did on my holidays

Got back last Friday from a week’s holiday in South Wales with the usual ex-Warwick suspects. Total head count this year was twenty-five adults, by my reckoning, with a further eight little ones. The was the only small boy amongst the kids; hopefully either and will produce another boy, otherwise it’s going to be him versus the monstrous regiment of women. Anyway, he enjoyed charging around with the elder girls (Lottie, Thea and the twins), even if it was a little trying on the eardrums of the rest of us.

Thursday: stayed overnight at the Wheelwrights Arms, and met up with Simon (Bath RT and ex-colleague of ) for a bite to eat. Very nice indeed.

Friday: Shopped in Bath in the morning, sat in traffic en route to Wales, arrived at Plas Glansevin and flopped.

Saturday: A lazy day. Faffed around in the morning, then headed into Llandovery for the farmers’ market (bought elderberry jam and a nice piece of Welsh black beef) and a cream tea with the Mapes. Cream tea passable, service poor, didn’t tip. Took the to the playground. cooked for all the older children and their parents.

Sunday: Weather hot. Again, faffed around in the morning while contriving a plan to go to the beach. Lost argument for a trip to the Cardigan Bay coast (Mwnt, Tresaith or Llangranog) in favour of the Gower (in fairness, it would have been a bit of a hike) and set out with the Mapes and the Lloyds. The Lloyds fell by the wayside, so just the Mapes and the Garks had a picnic on Broughton Bay. Introduced the to the sea (sort of unsure) and sand (liked), and listened to him grinding his teeth on sand. Weather v. hot, so had a dip in the outdoor pool on our return. ‘s birthday, so , and their brood dropped by for a flying visit (raising the girl:boy ratio amongst the children to 9:1). Rather good sausage casserole from the Lloyds in the evening.

Monday: Weather hot again. Headed off to Carmarthen in the morning to try and find i) sandals and ii) sunglasses for the . Failed at the first, succeeded at the second. If it weren’t for the blue frames with footballs on, the wraparound mirrorshades would make him look like a 1/3rd scale Keanu Reeves in dungarees. In the afternoon, went to the Gwili Valley Railway to reintroduce the lad to steam trains. Rather more interested than previously (cue cries of ‘baya!’), although he seemed to like the miniature railway more than the standard gauge. Must be a matter of perspective. Went a bit mad in the shop and bought all the Ivor books, the Ivor DVD, etc. restrained herself and came away with just an Ivor snowglobe, while I made do with a secondhand book on the planned German invasion of the UK in 1940, as you do. Another dip in the pool and a rather nice courgette risotto (with our own courgettes) to round off the day. 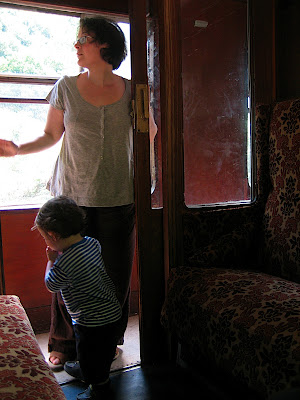 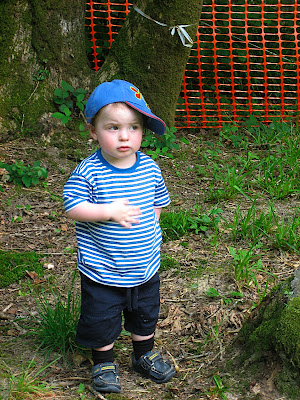 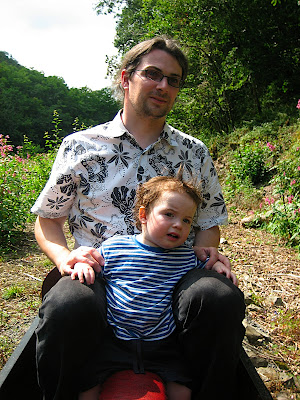 Tuesday: Rained overnight, and looked like it was going to rain again, so headed off to the caves at Dan yr Ogof with the Mapes and the Lloyds. Weather held out fairly well until the afternoon, as did my back from carrying the lad around the caves. The first caves seemed to wow the lad, while the waterfall in the Cathedral cave reduced him to a state of slack-jawed ecstasy. Didn’t enter the Bone Cave, mainly because of the long flight of steps to get to the entrance. Also, dinosaurs go ‘rawr’ according to the . We haven’t taught him this, and I don’t think that the nursery have (although I could be wrong). Ancestral memory or imaginative small boy: you decide. 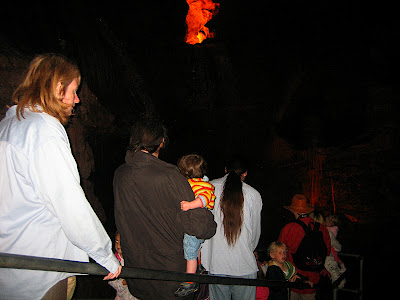 had cooked the beef we bought on Saturday the night before, so we picnicked on it with the Mapes and Lloyds (plus watercress, good bread, and mustard, naturally). Got back to the house, and realised that there had been some confusion as to whether or not we were cooking that night (we’d thought not, everyone else thought we were), so cooked the corned beef hash slightly differently than usual, which turned out to be both tastier and quicker. Who’d have guessed?

Wednesday: In a doomed attempt to educate the in the difference between sheep and cows (every large mammal apart from the big cats is currently a cow), we went to the National Wool Museum at Dre-Fach Felindre in the morning, then headed to the NT gold mine at Dolaucothi via the Gwili Pottery. Bought another decorative plate for the kitchen.

Dolaucothi has been further developed since I was last there (probably about twenty years ago). They’ve now made the Long Adit accessible to wheelchairs and pushchairs, so the can now say that he’s also been down a mine. Just as well, since we wouldn’t have been able to get him into any of the other workings, nor walk around the broader area. Unlike Dan yr Ogof, which is rather touristy, Dolaucothi has no fixed lighting in the workings, and has decent guides rather than naff AV interpretation with castoff mannequins from C&A. The lad managed to keep his hard hat on for the duration, which is something of a small miracle given his previous dislike of hats (although he’s also decided that he likes his baseball cap with the fish on). Lovely roast from the Mapes in the evening, so gorged myself on veg. 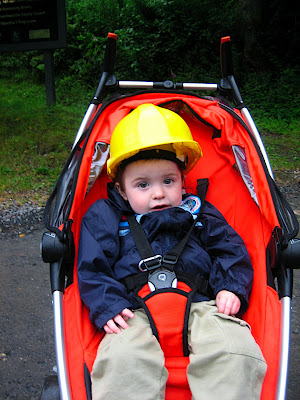 Thursday: Our penultimate day in the house, so we decided to take the to a castle. Had a toss-up between Cilgerran, which I remembered fondly from my childhood (and which is close to Newcastle Emlyn), and Kidwelly, which I hadn’t been to before. Chose the latter, which was fortunate; Kidwelly is a Norman castle with an extensive C13th rebuild, and has some of the best-preserved fortifications that I’ve seen in Wales. 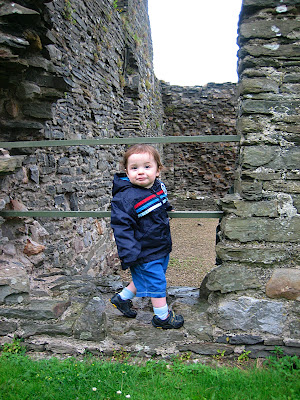 Post-castle, headed for Dinefwr Park, just outside Llandeilo. Unusually for an NT property, the building contents had been sold off before they took possession, so they took the decision to refurnish the house to a date in 1912 rather than try to recreate its most recent inhabited state. The result was that you had a house where all the artefacts could be handled and which wasn’t cluttered with the accumulated bric-a-brac of the previous owners – they’d also done some excellent social history work on the below-stairs staff in the house.

Dinner was an avocado, bacon and black pudding salad, since almost everyone else had buggered off to the pub. Would have been nice to have been told about this, since our opportunities for going out sans are few and far between. To top it off, picked up a stomach bug that someone else had earlier in the week and spent the night throwing up avocado, black pudding and bacon.

Friday: Still feeling poorly from the night before, so no breakfast. Packed the car, and ineffectually helped clear the house (extra kudos to Mark for collecting the contents of the bins in the rooms). Drove into Llandeilo, which is really rather nice (bit of a shame that we hadn’t got to it earlier in the week – Kav’s given a much better account here), and then settled in for the drive back to Southampton. Stopped off en route in Coleford to visit another of ‘s ex-colleagues. Coleford is lovely, if cramped; the High Street wasn’t wide enough for two cars to pass (the chap we asked for directions jovially suggested that we might want to fold back our wingmirrors), and we managed to drive through the village twice before finding the house (and we found it only because Sheila stood in the middle of the road).

There were a (very) few (very) minor niggles with the week: